skip to main | skip to sidebar

Back to the Bacteria 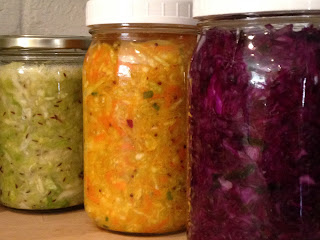 In my fermencentric household moving from fruit smoothie bowls and classes on raw chocolate to fermentation in short order is not unexpected. Fermentation has been a secret passion and then a not-so-secret passion of mine for a number of years.  Back in the summer of 2010 little did I know that when I began experimenting with fermented beverages and sourdough pancakes my life would never be the same.   In no time I quickly moved to krauts and pickled turnips as summer turned to fall which then lead to the exploration of fish ferments and catsups in the winter and then light fluffy fermented nut cheeses and elixirs made from flowers in the spring.  Now when I encounter a new food I wonder what will happen if I ferment it.  Just about every nook and cranny, cupboard and closet in my house has been repurposed at one time or another to make way for the alchemical, almost magical, phenomenon called fermentation.

My secret life began to gain a little traction when I met up with folks from the fermentation festival held yearly and then bi-yearly in Santa Barbara and most recently in Los Angeles.  Founded by mother and daughter Lynn Hartman and Katie Gershfelt, the festival which aims to revitalize traditional food preparation methods and promote local food and traditional farming practices as well as empower attendees to nurture their immune systems and micro-biome with beneficial bacteria found in fermented foods, is just so totally aligned with what I have been doing that I couldn't believe that I had just located so many like-minded people!   It was SO exciting to find the festival and be part of it and the growing community of people - from all walks of life - from amateur fermenters to accomplished entrepreneurs - who are beginning to challenge the way we view our food, how we view our connection to the earth and how we inhabit it.

For the last couple of years I have taught numerous classes on how to make lacto-fermented soda, kombucha, kraut, kimchee, dill pickles, nut cheese and the list goes on and on as more and more people begin to understand the importance of fermented food.


It is hardly surprising that the final class of the year 2016 - to be held on the winter solstice - will be a Winter Kraut Making Gathering.

Another noteworthy item -  and I will be sharing details later - I am very honored to begin work on ferments for a 2017 Slow Foods Ventura event which will be held in conjunction with American Gut Project which will track the influence of fermented foods on the human microbiome.

It is a rainy night here in Southern California.  The door just knocked and it was a friend of mine standing in the rain with a new baby kombucha scoby in a jar for me!  Yahoo!  Back to the bacteria!
Posted by Lisa at 6:41 PM

Lisa
Hi! My name is Lisa and I am the creator of Serene Cuisine - a personal chef business. For as long as I can remember I have been passionate about good food. I have been known to forage in the hills, garden in the back yard, and scour the local farmer's markets in search of the best and finest ingredients. I have found that foods that are local and traditionally raised taste better. This blog was inspired by my daughter Carrisa who lived with me the summer of 2010 because she wanted to learn how to prepare healthy food. This is a record and sometimes a retrospect of some of our shared food adventures. Carrisa is back in school now - but will continue to be a major inspiration and contributor to this blog.